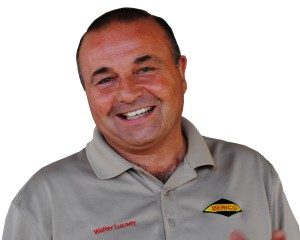 When it comes to energy efficiency, all air conditioners are given a SEER rating (Seasonal Energy Efficiency Ratio). The minimum SEER rating used to be 10, but the federal government recently upped it to 13. Most contractors won’t install any systems that rate less than a 13. A good SEER rating is 16 or higher. A great SEER rating is over 20. Of course the higher the SEER rating, the more expensive the system. But don’t let that deter you from purchasing a better system. The higher the SEER rating, the more money you will save on your energy bill. In fact, the money you save on energy will pay for a new system in a few short years.

Has your energy bill been getting higher and higher each month? This is a sign of poor performance by your air conditioner. Look back at your records; is your bill higher this summer than it was last summer? Unless the weather has been significantly hotter this season than last, most likely your air conditioner isn’t running as well as it was. A tune-up could help, but may only be a short-term fix.

Berico Heating and Air Conditioning has been serving the Greensboro area since 1924. Berico technicians have the experience necessary to recommend the best air conditioner for your home, and they can install it correctly. Don’t continue to lose money because your air conditioner doesn’t run as efficiently as it should; replace it sooner rather than later.

*Must be full system with heating & AC components to qualify. Cannot be combined with any other offer

We are Better Business Bureau® Accredited! Click our score below to view the full report!

We also recently won the A+ Super Service Award from Angie’s List!

Warning: count(): Parameter must be an array or an object that implements Countable in /home/berico1/public_html/wp-content/plugins/wp-testimonial-with-widget/includes/widget/wp-widget-testimonials.php on line 17

Warning: count(): Parameter must be an array or an object that implements Countable in /home/berico1/public_html/wp-content/plugins/wp-testimonial-with-widget/includes/widget/wp-widget-testimonials.php on line 23

Warning: count(): Parameter must be an array or an object that implements Countable in /home/berico1/public_html/wp-content/plugins/wp-testimonial-with-widget/includes/widget/wp-widget-testimonials.php on line 24

Warning: count(): Parameter must be an array or an object that implements Countable in /home/berico1/public_html/wp-content/plugins/wp-testimonial-with-widget/includes/widget/wp-widget-testimonials.php on line 25

Warning: count(): Parameter must be an array or an object that implements Countable in /home/berico1/public_html/wp-content/plugins/wp-testimonial-with-widget/includes/widget/wp-widget-testimonials.php on line 26

I recommend Comfort & Protection Service Plans to everyone! When my oil furnace needed to replace its heat exchanger and some additional parts, being on a plan saved me $1,095.

I first used Berico in August of 2009 and am now entering my 6th year. I have always believed that it is better to prevent a problem than to solve one, and your technician have done a "bang up" job of keeping my unit in excellent working order.

Replaced a gas furnace that was original to house built in 1986. Replaced Air Conditioning Unit that was installed in 2001. Installation was smooth, completed on schedule, and I am very satisfied with the price as well as the installation work performed.

Every visit by Berico is a pleasure. The technicians are friendly, knowledgable and honest. I appreciate the time they take to explain things.

Our technicial did a good job of servicing our two systems for summer. He helped teach us-once again- how to make changes in the thermostat, which we need to do before travelling. Thanks. RB

Berico recently installed a new unit at our home. Berico offered several financing options for us and the approval process took 30 seconds. We were very impressed with the professionalism, honesty, dedication, and personal touch of the whole work crew of our job.

Gentlemen came out and installed new tank and were very professional. They completed the job in a good amount of time and cleaned up behind themselves. Would highly recommend to others!

My system uses a ridiculous amount of oil and last year, I ran out regularly. Becky at Carolina made sure to keep an eye out for us and followed up regularly to ensure we were in good shape. They worked with us on our payments and were just really good to us.

This is an outstanding company, they are always on time every time and do what they say they will do. I highly recommend them!

Signed up for the Annual maintenance service after hearing for a commercial on the radio for them. Everyone I have dealt with has always been nice and professional. Had an issue where I needed a new capacitor on my heat pump unit - no big deal.

I just can't say enough about the good service and friendly folks at Berico. Keep up the good work! I like your Sharing the Warmth program too. It is a great way to get help to our neighbors, even those we don't know.

There isn't a nicer group of people to deal with. The service was done with a very polite maintenance man. He was quick, polite and very friendly, and very efficient. I would recommend them to anyone. I also want to mention how polite the office staff was.

We are a very unique customer for Berico. We use them to maintain our seven air conditioners for our commercial data center with hundreds of servers, routers and switches. Their techs are always careful in our data center and take extra caution to make sure they don't disturb any of the servers.

Everyone at Berico has been very helpful. Salesperson was very straightforward and knew the product well. Office staff has been extremely personable, yet professional. The installation crew was very efficient. Looking forward to a long relationship.

We have been using Berico since 1976 and have been pleased enough that we have never changed providers. Their workers have been helpful and competent. We are now on our second furnace and second heat pump and while there have been problems they were all resolved.

Berico (by way of Alamance Oil in Burlington) has consistently provided immediate service and help with my account when I have needed it.